First steps, challenges and discoveries as an expat in Munich

Home First steps, challenges and discoveries as an expat in Munich 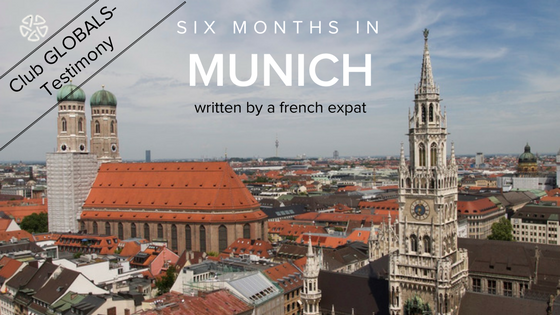 Arriving in a new country is never easy especially when you don’t really know anyone who’s been there before. That’s what happened to me when I decided to study abroad in Munich for my exchange program.

I arrived there with my suitcase. And without a clue on how I would manage to make friends and do all the paperwork. Munich University of Applied Sciences helped me with my health insurance (Expat, Public or Private) and public transportation papers. And that’s it. Then my landlord explained to me that I had to register for something called KVR (Kreisverwaltungsreferat, it’s the registration office) and it seemed important. She gave me an address saying that I should go early in the morning because of the crowded lines; bringing with me my ID and accommodation contract. At the end, I waited 2 hours there (which is really not that bad), struggling with the registration lady since she didn’t speak any English. But with my stammering German and her patience; we did it! This was one of my hardest experience in Munich.

Living the expat life at its fullest is also stepping out of its comfort zone and becoming friends with people from different countries. I truly enjoyed having an insight point of view from US citizen on Trump’s election. As well as a Brazilian opinion on Dilma Rousseff scandal, police demonstrations, and strikes. Having international friends is also a great way to improve your language skills. My first week in Munich was challenging since I was unsure about my words, sentences and my accent in English or German. At the end, I had to communicate and made progress real quickly.

Living in a Student residence (Studentenstadt) helped me meeting new people quite easily. Each Thursday there was a party in one of the buildings of the residence.

The night life in Munich was diversified and for everybody. For club lovers, there is the MMA which plays electronic music and has a really nice setting and large rooms. There is also Neuraum is with 4 floors, electro, party/ dance, hip-hop and traditional German music. Bahnwärter Thiel is a really special electro club with a nice and special interior (one part of the club is in a train) among many other clubs. For hipstery bar, there is the Stammbar where you can pour your own beer. Biergartens are also a must-see in Munich, especially during summer time. Last but not least the Oktoberfest is truly a great way to drink and mingle with your new table’s neighbors, I met a lot of foreign people but also many locals.

The other one was when I visited the Doctor. I tried to find a “without appointment” doctor online but it was not easy. I finally asked a local friend if she knew any doctor who could accept me without an appointment. She then gave me her doctor’s address.

When I arrived, I tried to explain my situation in English to the doctor’s secretary but she didn’t speak a word of English. I had to use my not-that-great German and she understood that I needed to see the doctor. She gave me paperwork to do since it was my first time visiting a doctor in Germany. The papers were very hard to fill in: most of them were only in German. We spend an hour filling them. She explained to me what I had to write in German and google translator was also very helpful. When I finally saw the doctor, I found out that she spoke perfectly English and was really relieved because I only had some knowledge in German and it would have been difficult to explain to her what I had in German.

As a French person, I didn’t live a total “lost in translation” scenery. A lot of Germans spoke perfect English and some even spoke French. Here are some differences I noticed during my stay. I already knew that Germans are respectful of the law but I was still surprised when I saw that everybody was waiting for the green light to cross the street even if there was no car around. And the look people gave me when I crossed in the middle of the street kept me for doing it again. In subway stations, there is no fence to access the subway and there are not that many people who don’t pay their ticket.

The German’s politeness stroke me when I arrived, everybody was very polite and eager to help you in every way they could. Of course, there are some exceptions and some people talked to me in Bayerische so sometimes I didn’t understand anything.

Germany does not often accept credit cards, they have special cards called “giro card” to pay in supermarkets. They always use cash. At the beginning, I was not comfortable carrying 100€ on me every day for my groceries or other stuff because I was still worrying about pickpockets. In Munich, it is very safe. You can come back home after a night out at 4 am and no one will bother you in the streets or the subway.

To put it in a nutshell, these six months were very fulfilling. I gain a lot of autonomy and maturity. Making new friends allowed me to broader my horizons. I discovered how much I loved living in Germany and will do everything I can to work and live there.